On November 11-13 there was a Game Jam held at Creactive, and I was part of it. There were around 80 participants and the results were amazing, considering that the time frame was only 48 hours. I had never been part of a Game Jam before so this was a really great experience. Also, since I am mostly doing my games during my spare time on my own, synchronizing the projects with a number of people was also a new experience. I thought I’d share some insight.

I have come across many that are interested in games and interested in making games (or projects in general). However, these people also come with a “half-assed” way of doing things. For instance, if I would have gotten a quarter for every time I heard someone say “Yes! Let us do that” and then followed by “Aw man, I can’t. I don’t have time”, I would be a millionaire for sure. There are always excuses to not be part or start a project.

I went to the game jam with a really bad headache. There hadn’t been a good night sleep in a couple of days so I was thinking of leaving the event before it even started. However, I pulled myself together, stayed and had great fun. I ended up with about six other people and created a really weird game which actually was super fun to play. Some of my team mates had never used Unity before and really wanted to get to learn about the engine. These people got to be the level designers and as such they got a feeling of the engine itself. There was one person who really did not want to program since that was what he did anyway during the rest of his week, so he became our artist. He was really great at creating assets. For me, and one other, the game mechanics were the most interesting parts. Our task was simply to create the scripts.

So what happened? Well, the game became awesome! We had so much fun creating the game and were the only ones who were heard during the game jam. People started to come to us to see our game while creating it as a result of hearing us laugh so much. Why? Because we (the developers) cared. And …

When people do what they are interested in, they care. Once they care the intrinsic motivation starts to surface and people push themselves harder.

One thing that was very apparent during the project was the need for a leader. During the brainstorming session in the beginning many of the participants were very (and I mean very) silent. You basically had to ask each and every one of the participants in order to get them to open up a little. It was not much of a brainstorming activity to be honest. Furthermore, during the game development process I found that many of the team members were looking for confirmation from us, “the leaders”, even though we delegated the tasks to someone  else. For instance, the animator came to me and the other programmer, instead of going straight to the lead artist, time and time again, even though we explicitly said that we had no opinions on the matter. Also, the lead artist came to us time and time again after a question he received regarding design. One thing that stood out was …

In the beginning there was no real problem since everyone was assigned a task and everyone was happy with that. However as time went by the need for a repository became more and more apparent, even though updates were graphics related. Of course this came to no surprise since this is an integral part of my everyday work, but with some inexperienced users this felt like an overkill. Luckily, Unity has a mechanism for packaging and using this feature saved both time and effort. Of course there was no version tracking, nor was there a way for everyone to be synchronized. However, considering the size of the project and the number of hours left, the decision was made to just go with the packaging system.

The adventures of Sponkey, the spider monkey

The result of the 48 hour game jam is a 1-4 player chaotic co-op game where each player controls a set of hands. Since Sponkey is a spider monkey, of course he has 8 hands. All you can do as a player is to grab things and interact with them using the control stick of a controller (such as PS4 or XBOX). Grabbing the level geometry such as grounds and walls and applying a force using the control stick pulls Sponkey in a direction. In order to jump you need to release at an opportune moment. You can also grab sticks and use them to remove crabs that weigh you down. Having a crab stuck to Sponkey significantly raises the difficulty to jump. The objective of the game is to get to the banana fly, the most delicious dish for a spider monkey. 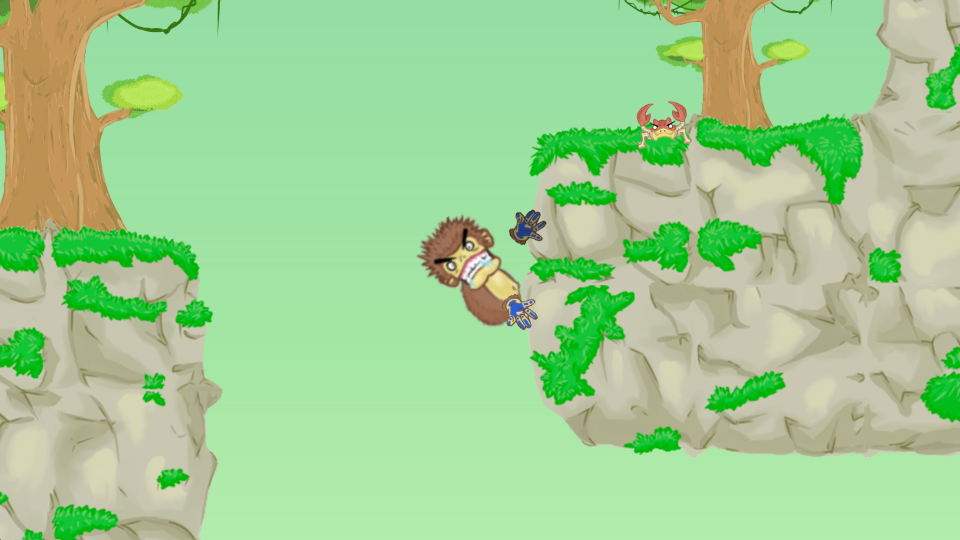 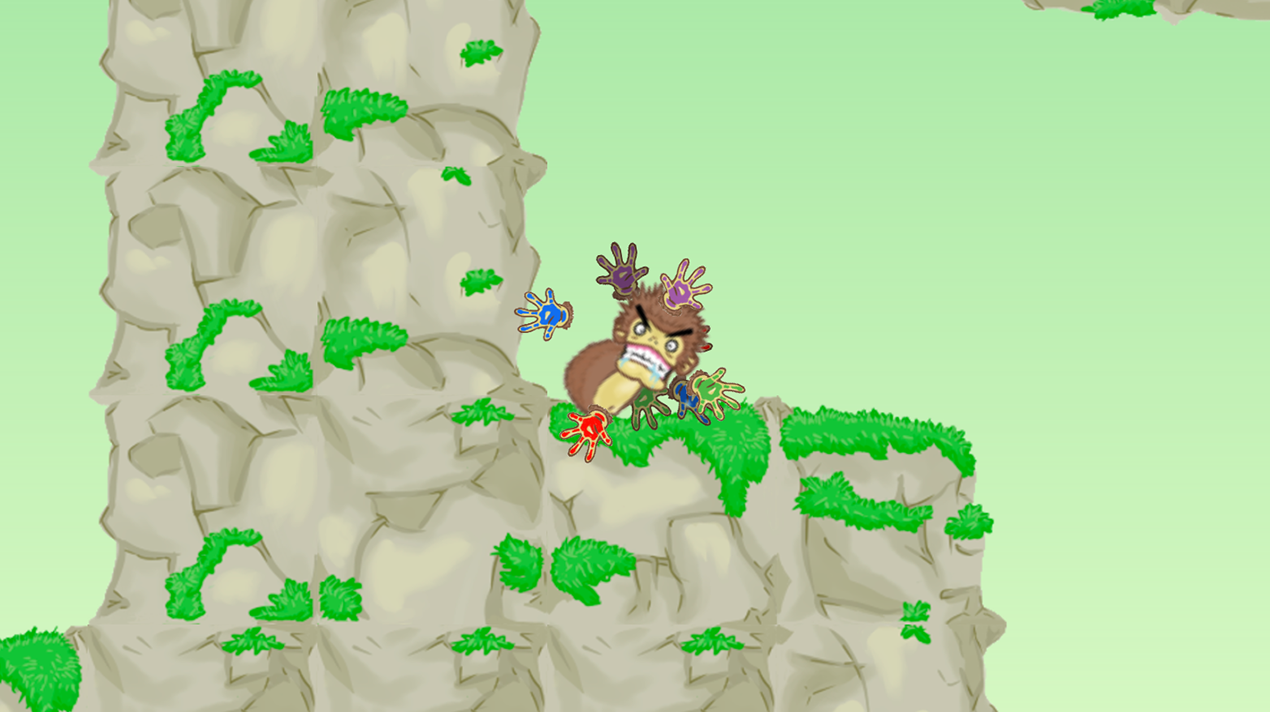